You are here: Home / KnowledgeBase / Customers/Clients & A/R / How Do I Resort Lists?

Lists are one of the foundations of QuickBooks, and from time to time they can become out of order.  That’s when they need to be resorted.  Some common indicators that it’s time to resort your lists include:

Resorting any list will undo any special order you’ve applied to the list, and this activity can’t be done in multi-user mode.  It’s always a good idea to backup your company file before undertaking an action that can’t be undone.

There are 8 lists that can be resorted. They are:

Since this technique is often used to address possible data corruption, we’ll outline the most efficient technique to resort multiple lists, but you can also choose to resort an individual list by opening up a Center and right clicking on a list element.

The first 4 lists are collectively referred to as Names or Entities, and there’s an easy way to resort these 4 lists:

The screenshot below shows the combined Name list in Step 4: 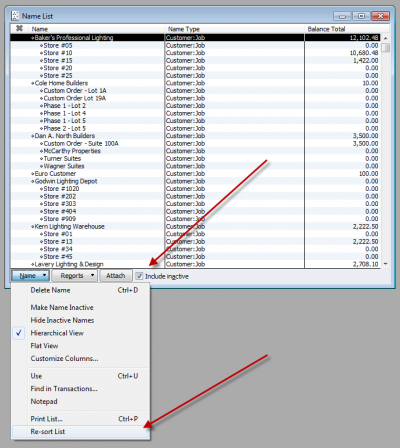 After resorting lists, close and reopen your company file (.qbw) to insure that all changes are successfully written to disk.

Resorting lists is discussed in this Intuit knowledge base article.