You are here: Home / Archives for Intuit Statement Writer

After clicking on the Intuit Statement Writer menu selection, Microsoft Excel opens to a blank spreadsheet and displays the fatal error message:

Here’s a screen shot of the exact error message: 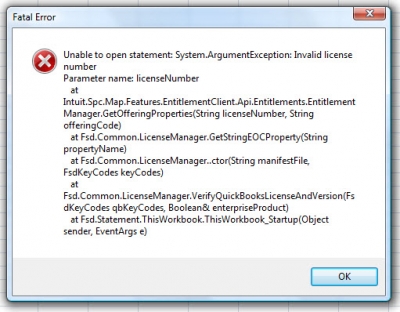 According to Intuit, this error occurs because the file iswruntime.dat contains an incorrect license number; the error has only been observed on computers running Windows Vista.

To fix this error message, simply rename or delete iswruntime.dat, which is located in the C:ProgramDataIntuitStatement Writer folder.  When Intuit Statement Writer next starts, it will re-create a new file.

This error message is discussed in this Intuit knowledge base article.