You are here: Home / Archives for Outlook

For 2012, Intuit is phasing out the online QuickBooks Attached Documents and including a capability for free local document storage.

Good: Local document storage on the computer running QuickBooks is now free, and the new Doc Center supports a drag-and-drop interface, including the ability to add Microsoft Outlook emails to Doc Center. Supported documents can be attached to QuickBooks lists or transactions. Users of QuickBooks Attached Documents have access to a tool to migrate online documents to local storage.

Good: Intuit has lowered the price of QuickBooks Attached Documents, where the maximum monthly fee is now $9.95 for unlimited document storage.

Bad: Similar to the fate of QuickBooks 2011 users, QuickBooks 2010 users of online document storage (either Document Management or Attached Documents) can use the service subject to Intuit’s sunshine policy. However, since QuickBooks 2010 was released 1 year before QuickBooks 2011, the sunshine date is 1 year earlier, or May 2013. New, free subscriptions to Document Management with a cap of 100 Mb can be created, but these were intended to allow evaluation of the service when it was first introduced; it’s unlikely anyone would want to evaluate a service that is being phased out, and the 100 Mb cap has little practical value outside of evaluation testing.

Yes. Starting with QuickBooks 2011 and Enterprise Solutions 11.0, in addition to Outlook and QuickBooks Email, QuickBooks users can choose to send forms, such as invoices or statements, via web-based email systems, including:

Here’s a screenshot of the Send Forms sub-menu of the Edit->Preferences menu selection: 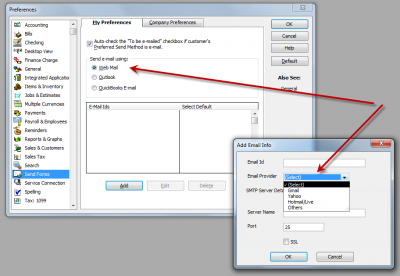 Users of versions prior to QuickBooks 2011 have more limited methods to send forms.

With the addition of new web-based email options, Intuit removed QuickBooks Email as an option unless you’ve paid more to be an active subscriber to another Intuit supported service, including:

To use any of the above email clients, choose the Outlook setting on the Send Forms sub-menu on the My Preferences tab on the Edit->Preferences menu selection.

Users of 2007 series and older are limited to using QuickBooks E-mail, which is an online service provided by Intuit.  Access to this service will no longer be available to QuickBooks 2007 users after May 31, 2010.

Online services are only available to users of a current QuickBooks version, so it’s important to monitor Intuit’s service discontinuation policy regarding the availability of online services for your version to avoid unexpected disruption to certain program features.

If you need to upgrade your QuickBooks software to continue to be able to send important forms and reports via email, see the links on our Buy QuickBooks page. 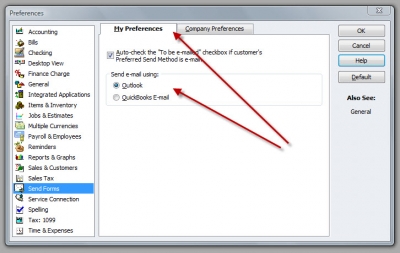 The principal advantage of using your own email client is that you can automatically preserve a copy of the emails you send in a folder in your email program.  With QuickBooks E-mail, you need to be sure to send a copy to yourself.

The simple answer is yes, but, judging from posts on Intuit’s community forums, there’s a lot of confusion on the topic. 1 Most of the initial reports of incompatibility were due to users running a beta version of Microsoft Office 2010, running a 64-bit version of Office 2010, or not having updated QuickBooks to the latest release.

Intuit continues to address compatibility for the 64-bit version of Microsoft Office 2010, as discussed below.

See our article on how to determine your release of QuickBooks for more information.

For more information, see this Intuit knowledge base article.